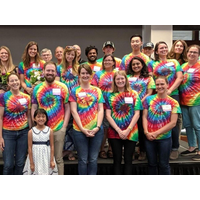 After a 25 year hiatus, HoTPCA hosted yet another wildly successful Peace Corps Connect Conference! Read on for a recap of the conference, and check out the conference photos here: https://www.facebook.com/pg/hotpca/photos/?tab=album&album_id=649803168877393

From June 20-23, 2019, the Heart of Texas Peace Corps Association partnered with the National Peace Corps Association to host their annual Peace Corps Connect conference right here in the heart of Texas. HoTPCA was thrilled to have more than 300 conference attendees in Austin! Pulling off a conference of this size was truly an all-hands-on-deck occasion. With the combined efforts of over 40 dedicated volunteers, 15 planning committee members, 27 exhibitors, more than 50 speakers and panelists, and a dozen Pitch Competition Finalists, thousands of people hours were necessary to make this event come to life. The PCC 2019 planning committee was blown away by the spirit of service that was exhibited by our central Texas RPCVs, future PCVs from UT, and RPCV friends and family who donated their time simply because they believe in the cause. THANK YOU to all of you who helped in any way - the conference was a smashing success by all accounts, due to your monumental efforts!

Throughout the weekend, conference attendees were informed about and inspired by the theme "Innovation for Good". Local and national experts provided insights around world-changing innovations in higher education, advocacy, climate change and environmental policy, young women's development, and entrepreneurship. During special "lunch and learn" sessions, conference guests were able to engage with these experts in small group settings to ask questions and learn more about the innovations that are driving social good in our world.

To provide living examples of innovations for social good, competitors shared their ideas for social impact businesses and organizations during the PCC Pitch Competition on Saturday afternoon. Judges awarded cash prizes, in-kind donations, and networking services to all of the finalists, and HoTPCA was proud to support Austin-based Tiny House Coffee with a $500 grant as our "local choice" prize winner.

Throughout Friday and Saturday, PCC attendees were inspired by domestic and international films that were screened throughout the conference in the Documentary Hall. Special highlights included a sneak peek of A Towering Task, the recently released Peace Corps documentary, as well as a featured screening of ABRAZOS by Luis Argueta, the story of a group of refugee children from Guatemala who were reunited with their family members after years of separation. In an incredibly moving gesture, the children who had been profiled in the film ABRAZOS traveled all the way to Austin to surprise the filmmaker during the screening.

On Friday evening during the conference, HoTPCA shared our local flavors with over 200 guests during Regional Dinners at 9 local restaurants. Over Ethiopian, Uzbeki, Guatemalan, BBQ, and many other tasty meals, PCC attendees reconnected with long-lost pals from service, made new friends, and shared traditions and stories. For many, celebrating these relationships is the highlight of PCC each year, and HoTPCA was honored to facilitate so many gatherings of friends.

To conclude the conference, HoTPCA also hosted two community service opportunities to highlight the belief that "service doesn't stop at COS". One group of PCC volunteers battled poison ivy and contributed to clean-up efforts in Waller Creek on campus while another PCC volunteer group worked with local non-profit the Flo Code to pack menstrual kits for central Texas women in need. Huge thanks to those volunteers who closed out the conference by serving our local community!

Even though the whirlwind that was the national Peace Corps Connect Conference has been over for months, many of us at HoTPCA are still enjoying the "ripple effects" of this amazing and successful event. Thanks to our local efforts to co-host PCC 2019: